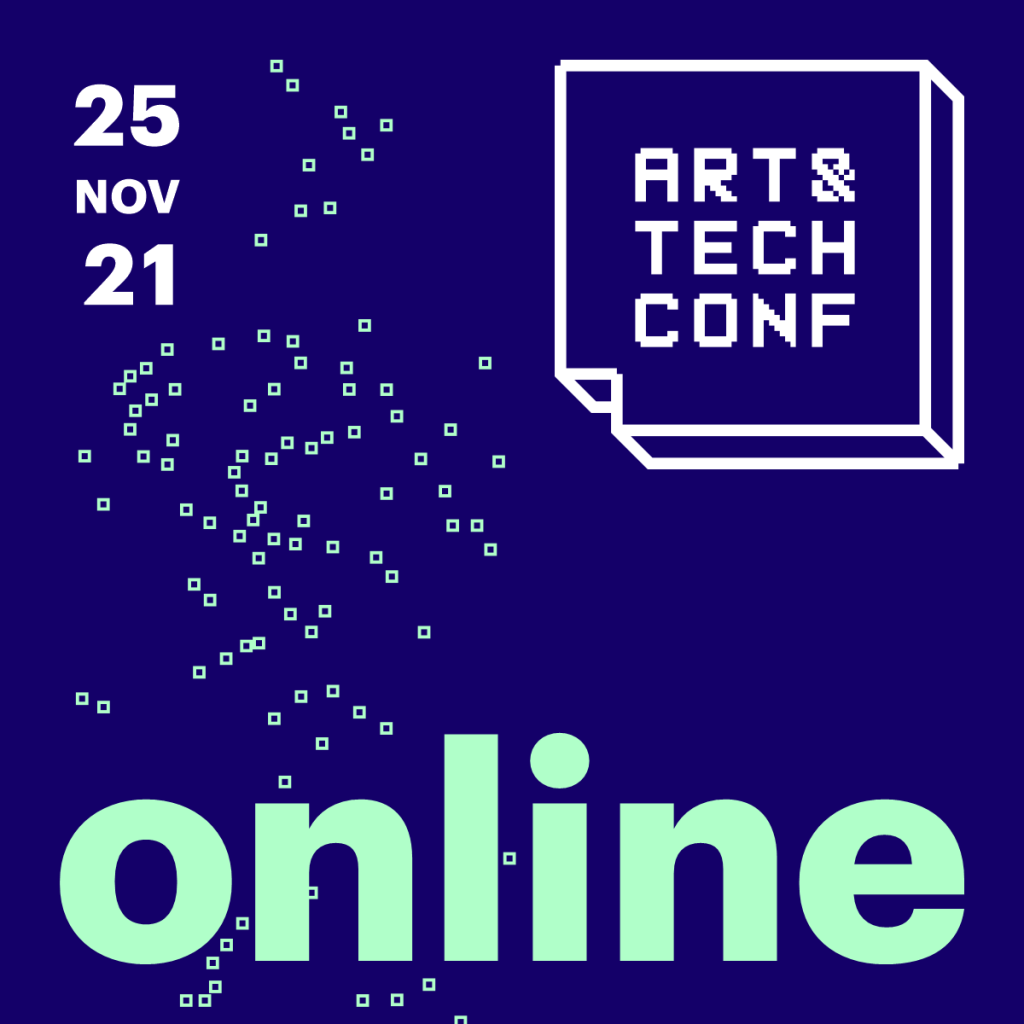 We care for your and our speakers’ safety and comfort, but currently, we cannot secure it during this pandemic situation. That is why we decided to do the whole festival online, with the entire program and all the confirmed speakers of Art & Tech Days Conference. More information HERE.

Haris Biskos is an architect and urbanist based in Athens. His work explores contemporary aspirations and contingencies of urbanism through research and action. He has been drawing on Athens as an innovation test-bed to develop prototypes that address a range of challenges that emerge today in cities putting citizens and their collectives at the forefront of the the solutions and through this work he has been supporting urban authorities to shape public policies and development strategies. Haris is an international city expert and he is working with European Union and its initiative Urban Innovative Actions supporting the implementation of Kosice 2.0 project led by the City of Kosice.

He had been the head of synAthina collective in Athens developing urban and social innovation prototypes using participatory processes helping the City to tackle challenges such as vacant public spaces, sustainable urban management, refugee integration and others and shape its policy agenda. He had been the designer and program manager of co-Athens initiative, a
public platform that aims in developing a dynamic model for social inclusion based on nurturing common opportunities for refugees and locals to support the needs of the community. Haris has taught urban design as adjunct faculty at the University of Patras, School of Architecture.

Neil Harbisson is a Catalan-raised, British-born contemporary artist and cyborg activist best known for having an antenna implanted in his skull and for being officially recognised as a cyborg by a government. The antenna allows him to perceive visible and invisible colours via audible vibrations in his skull including infrareds and ultraviolets as well as receive colours from space, images, videos, music or phone calls directly into his head via internet connection. Harbisson identifies himself both as a cyborg; he feels he is technology, and as a trans-species; he no longer feels 100% human. His artwork explores identity, human perception, the connection between sight and sound, and the use of artistic expression via new sensory inputs. In 2010 he co­-founded the Cyborg Foundation with Moon Ribas, an international organisation that aims to help humans become cyborgs, defend cyborg rights and promote cyborg art. In 2017 he co-founded the Transpecies Society, an association that gives voice to people with non-human identities defends the freedom of self-design and offers the creation of new senses and new organs in the community.

Abel Korinsky is working on installations, performances, gallery and museum works and leading together with his brother studio Korinsky based in Berlin. After studies in Music, German language and literature, social sciences and history at the University Wuppertal he completed a Master in Sound Studies at Berlin University of the Arts.

Through audio-visual installations, they are trying to evoke a different kind of perception. They create site–specific works and have worked in old factories, churches and many other often disused spaces. The intense environments in their installations are demanding of all the senses. Especially the beauty of nature/ natural phenomena get distorted or destroyed by sensual interventions of sound, setting of light and sculptural installations and confront the audience with an altered reality.
They have been commissioned to create works e.g. for Ars Electronica Linz, Melbourne Biennial, Grace Cathedral San Francisco, MMCA Seoul, Kestnergesellschaft Hanover.

Milota Sidorová is an urbanist, a facilitator, a moderator, an analyst, a networker, and a feminist in the services of fairer urban planning. She is the director of The Office of Participatory Planning of the Metropolitan Institute of Bratislava.

She is interested in the complex and well-thought city projects in spatial planning and urban development. She is also a keen traveler. This combination has predetermined her for practicing fair urbanism. So what does she do? She improves the non-governmental, public, or private projects in Central and Eastern Europe in various ways. She wants good urban projects to be more strategical, fairer, and better communicated.

She deals with urban development in interdisciplinary contexts. She is the founding member of the international festival about urban planning called reSITE. As the advisor or the researcher for more inclusive cities, she has already cooperated with many domestic or foreign partners such as the Prague Institute of Planning and Development, The Heinrich Böll Foundation, The Goethe-Institut, and many others.

She was a jury member of N.I.C.E. Network for Innovations in Culture and Creativity in Europe, Vision for Milada Lake, and Architectural Competition for Alma Rose Square in Jihlava. In 2019 she was nominated for Personality of the Year in Architecture and Development, ASB Gala, and received the Nava Pollman Association award.

On Radio FM, she hosts a radio program about urbanism and architecture called Živé mesto FM.

Michela Magas bridges research and industry with a track record of over 25 years of innovation. She is Chair of the Industry Commons Foundation, innovation advisor to the European Commission and the G7 leaders, Member of President von der Leyen’s High Level Round Table for the New European Bauhaus, and member of the Advisory Board of CERN IdeaSquare (ISAB-G). She created the Industry Commons concept in 2015 whilst co-chairing the Innovation Ecosystems WG for the Alliance of Internet of Things Innovation (AIOTI). In 2017 she was awarded European Woman Innovator of the Year and in 2016 she was presented with an Innovation Luminary Award for Creative Innovation by the European Commission and Intel Labs Europe.

She is Innovation and Sustainability Manager for the first of the Industry Commons EU-funded projects OntoCommons – a CSA which is creating an ontology ecosystem with reference data documentation for cross-domain interoperability. She is the Founder and CEO of Stockholm-based MTF Labs, a global community platform of around 8000 creative innovators and scientific researchers. The platform provides a test case for innovation in areas as diverse as neuroscience, forestry and microcomputing, and has been hosted worldwide by partners including Microsoft Research New England, Centre Pompidou in Paris and KTH Royal Institute of Technology in Stockholm. Over 20 years she ran Stromatolite Design Lab in London with global clients such as Apple, Nike and Nokia.

Dutch artist and innovator Daan Roosegaarde (1979) is a creative thinker and maker of social designs which explore the relation between people, technology, and space. He founded Studio Roosegaarde in 2007, where he works with his team of designers and engineers towards a better future. Together they develop ‘Landscapes of the Future building smart sustainable prototypes for the cities of tomorrow.

Roosegaarde: “I don’t believe in a utopia, I believe in a protopia: a prototype world that we are improving step by step. We do not know what the future looks like and what challenges that entails. What we do know is that there is no way back. If we do not invest in new ideas, we will die. We are all part of the prototype. Let us not be afraid, but be curious and work together.”

Roosegaarde has been driven by nature’s gifts such as light-emitting fireflies and jellyfish since an early age. His fascination for nature and technology is reflected in his iconic designs such as Waterlicht (a virtual flood) and Smog Free Project (the largest outdoor air purifier in the world which makes jewelry from smog) and Space Waste Lab (the mission to upcycle junk that floats in space).

Roosegaarde graduated from The Berlage Institute with a master’s in architecture. He is a Young Global Leader at the World Economic Forum, a visiting professor at several universities, was selected by Forbes and Good 100 as a creative change maker, and named Artist of the Year 2016 in The Netherlands.

Boris Vaitovič studied at Arts and Crafts School (graphic art) in Košice. He continued his studies at the University of Constantine the Philosopher in Nitra (Department of Ethics and Fine Arts), at the Academy of Arts in Banská Bystrica (postgraduate studies), and at the Faculty of Fine Arts of the Technical University in Košice (Department of Fine Arts and Intermedia), where he currently teaches. He devotes his time to painting, graphic, video art, photography, new media, and underground music. He has exhibited his works in Slovakia, Italy, Germany, France, Hungary, Romania, Poland, Czech, Netherland, China, Korea, and Japan.

A range of media art presents artworks based on responsive and interactive installations and unique specific hardware solutions. Crosspoint between analog and digital responsivity, measuring electrical capacity of the human body in the space or changing visual condition according to the view of visitor ends in unexpected experience. He is also the author of many socially and ecologically oriented projects. A sensor station for patients after a stroke, a kite with an autonomous electric turbine, or a light that shines thanks to the transformation of the residual heat of a cup of tea.

He will present the work Responsive Tables at the Art & Tech Days festival.

New media artist based in Bratislava, Slovakia. His works range from small intimate installations that are designed to be experienced by a single person to a big scale mapping that works with public space and bends the context of architecture in the city. They usually combine visuals and sound to create a tangible atmosphere that completely hijacks the mind of participants and creates a unique space dedicated to a single theme. Themes in his work often revolve around privacy issues and social media, religion, science and pure exploration of sound and visual in relation to the audience and its interaction with the performance or installation. He is also very active in the theater scene, designing stages and working with directors on empowering actors to manipulate visuals and sound live on stage.

His work on the festival will present a slice of time through human history and its relationship to technology – duality of a tool and curiosity, its potential to save humanity or ultimately doom it. These will be presented with minimalistic visuals and light design with cooperation of the philharmonic orchestra from Kosice.

The State Philharmony Košice was established in 1968 as the second professional symphony orchestra in Slovakia. It consists of more than 80 professional musicians, who concert not only in Slovakia but also abroad. Since its foundation, the Slovak State Philharmonic Orchestra has performed on various significant international music festivals, and at important cultural centers – they were the first Slovak symphony orchestra to appear in the USA.

Julia studied art in Moscow and Cologne, where she currently works. She addresses predefining the distance between biology, technology, nature, and synthetic intelligence in her artwork. The media art called Sole-Soil is based on the Gaia hypothesis, and she will present it during Art & Tech Days festival as the outcome of her two-month-long media art residency in Košice, which is organized in cooperation with KAIR – Košice Artist in Residence.

The Gaia hypothesis by British climatologist James Lovelock and the American microbiologist Lynn Margulis states that the Earth is a single living superorganism. Soil is the upper fertile layer of the surface of this superorganism, inhabited by collaborating communities (bacteria, fungi, plants), upon which the existence of all other life forms on the planet depends.

User interface design is about designing relationships. The main interface of human-soil communication is the reliefs and dents left by the surface of the soles of our shoes. These tactile interactions could become conscious and heal the soil layers by choosing the optimal shape of the sole, taking into account their individual needs and problems. Reasoning in dialogue with this sensitive skin of the Earth, the project prepares the conditions for a radical transformation of our relationship with surfaces – from extraction/exploitation to being gentle, caring, and following their needs.

He develops prototypes of urban and social innovations with participation. Haris Biskos at Art & Tech Conference

A Greek urbanist and architect, Haris Biskos, will be the speaker at the conference, and you can listen to his talk ONLINE on 25th November. ...

We are going online

Important information about shifting the Art & Tech Conference 2021 to a virtual format. ...